On Novemer 30,2020 from 9.00 a.m. to 10.40 a.m., the dissemination workshop “Sistemi automatizzati di risoluzione delle controversie – Automated dispute resolution system” was held by the Department of Law of UNINA – University of Naples.

Due to the pandemic, the dissemination workshop was held online by Microsoft Teams platform provided by UNINA.

The aim of the dissemination workshop was to promote automated dispute resolution system such as the European Small Claims Procedure through dedicated tools of LegalTech as are SCAN – Small Claims Analysis Net and CREA – Conflicts Resolution with Equitative Algorithms.

Particularly the seminar was held to clarify the importance of automated system introduced about dispute resolution such as the European Small Claims Procedure and the means through which it is possible to ensure the efficient and practical implementation of them as are SCAN and CREA.

The event started with the introduction of Professor Francesco Romeo who illustrated the field of application of automated dispute resolution system especially the European Small Claims Procedure.

Then, the speech by Dr. Irene Abignente who explained the EC Regulation No 861/2007 which introduced the European Small Claims Resolution Procedure and subsequent amendments, i.e. the EU Regulation No 2015/2421. During the analysis of the ESCP, Dr. Abignente highlighted critical and innovative points of the procedure. The ESCP is an alternative cross-border dispute resolution system that applies within the EU except Denmark and the United Kingdom, which is close to Brexit. The reference principles on which the procedure is based were explained, specifying the subject matter, the pecuniary reference value (i.e. not exceeding €5000.00), how to access the procedure and specifying that it is a “telematic” procedure that can be carried out even without the assistance of a lawyer. Following questionnaires and preliminary surveys on the practical application status of the procedure, the EU first and then the SCAN Consortium found some critical points. Above all, these criticalities are related to the efficient and practical implementation of the ESCP, which has proved difficult for European citizens to understand as consumers, small and medium entrepreneurs, but also as legal practitioners (lawyers and judges). These criticalities specifically concern the language in which the FORM prepared by the European Justice Portal should be filled in, the competence of the judicial authority to which the FORM should be sent, the instruments recognized by the judicial authorities of the Member States for the purpose of transmitting the document (e.g. by pec, registered letter or exclusively by hand as in the case of Greece). The speech ends with a reference to the SCAN Project which, through a dedicated website and a Platform, will make access to justice for the ESCP easier.

The second speech was held by Dr. Cristina D’Onofrio who illustrated according to what was explained by the previous speech, the aim of SCAN Project: Join the easy way to Justice so to make it easier the access to European Small Claims Procedure. The SCAN Consortium was set up at the end of September 2018 with the aim of making the procedure introduced to automate the law known and applicable with a view to increasing the efficiency of justice in cross-border small claims litigation. As a matter of fact, the European Small Claims Procedure is an ADR or Alternative Dispute Resolution; therefore, SCAN’s central role is to create a reference network of ESCPs linking the European Commission and the Procedure in question with the European citizen in the triple role of consumer, small and medium entrepreneur but also as a legal practitioner. SCAN has therefore made its motto a manifestation of intent: Join the easy to justice and thus make justice simple. SCAN is in fact a LegalTech tool and as such, it exploits not only artificial intelligence (where a dedicated Platform will be implemented as an interactive guide to the correct filling in of the “Forms” provided on the e-justice portal), but also the translation of legal signifiers into easily understandable textual and graphic contents. In this sense, the web site www.scanproject.eu has been built as a tool to enhance the project and, above all, its purpose: to make the ESCP easy to access and know. The website aims to make the law and the procedure user friendly. To do this the homepage has been built in a few blocks: header relating to SCAN’s brand identity, i.e. its digital identity as a channel through which to make access to the ESCP easy; a consequential page in which the central role is played by the ESCP; a body divided into three titles ( What is SCAN, What is the ESCP, what other questions the user – European citizen – could ask himself) accompanied by a video illustrating the contents of the first ones; a sidebar on the right side where the user can keep up to date by subscribing to the Newsletter or through social channels or a “How to” section where the user can learn more about the subject. Finally, in order to make the procedure easy to use the ESCP Platform will be on the home page and for which construction it was essential to use diagrams to translate the legal contents to be reported in the software of artificial intelligence.

The third speech was held by Dr. Flavia Rolando who explained the diagram she has built for the ESCP Platform. In order to make the use of the small claims procedure effective, the interested party encounters several obstacles before using this tool. It is important that the European citizen understands if the ESCP can be used and where the procedure is being set up. For this reason, diagrams have been created. The reference rules to be made by means of diagrams are: Article 2 of EC Reg No 861/2007 which defines the scope of the European Small Claims Regulation which defines the criteria for access to the procedure; Article 3 of EC Reg No 861/2007 is concerned with the definition of the cross-border dispute. The diagram is shown on the screen thinking of Art. 2 and 3 as a path that guides the user step by step to understand “whether he can access the procedure”. It is therefore a hierarchical diagram consisting of ‘yes’ or ‘no’ sections so that the European citizen knows whether his or her dispute can be settled under the European Small Claims Procedure. If, for example, the obstacles relating to the scope of application have been overcome, then the matter excluded from the scope of the ESCP will be dealt with: tax, customs or administrative matters, capacity of natural persons in matrimonial property regimes, maintenance obligations, wills and succession, bankruptcy disputes and proceedings relating to the liquidation of companies or other legal persons in a state of insolvency, social security. As a result of the various applications, the citizen will be able to resolve his or her dispute through the ESCP. Therefore, the Member Country to which the procedure is to be initiated in accordance with Regulation No. 1215/2012 is highlighted in the relevant step. The user is therefore easily guided towards the concrete use of the European procedure for cross-border small claims. The second diagram is then explained to define the “where” to start the procedure. More complex because it is necessary to translate the criteria of jurisdiction and the costs of the procedure. This second diagram has also been designed to make the definition of jurisdiction incontrovertible and transferred to the dedicated Platform through the definition of hypothesis + further conditions, solution and action. The hypothesis of the consumer is given by way of example in order to make it clear how the diagram has been constructed for the end user.

The fourth speech was held by Dr. Antonino Ferraro who is building the ESCP Platform and to explain which IT technology he has decided to use to build the dedicated application for the efficient and practical filling in of the Form about European Small Claims Procedure. The initial objective is to create a software application that verifies the feasibility of the legal requirements underlying the ESCP and the correct completion of the application or Form A. First, a choice has been made between native application or web app. The second is already multi-platform because it can be accessed from any desktop or mobile device, any browser or any reference operating system. A native application, on the other hand, means you need to download an application for that reference software. So, it was chosen to build the platform on the basis of a Web App. To develop a web app, we chose Microsoft’s “Blazor” technology, which is based on html markup language. The reason for the choice is due to the evidence that makes the platform user friendly and more usable: ready for any type of Browser, for any type of device and obviously with reference to any type of software (Linux or Microsoft, Android or Ios).  The Platform, built primarily in English, will be translated into all EU languages. The system is based on a tree structure taken from the diagrams explained by Dr. Flavia Rolando.

The subsequent speech was held by Dr. Francesco Giuseppe Sacco for another automated dispute resolution system whose value exceeds € 5000.00: CREA – Conflicts Resolution with Equitative Algorithm.  The CREA Project, in fact, has deepened the issue of Equitative algorithms as tools that can be used in alternative dispute resolution. The objective was to propose alternative solutions to some issues, facilitating agreement between the parties and “envy free”. The scenario that characterizes the algorithm at the base of the CREA software is illustrated. There is a number n of subjects; a set of M assets, an estimated value for each mj asset and an assigned quota for each agent. The system will give the relative solution to the “dispute” in the form of a share of each asset assigned to each agent. In the software’s articulation, the Subjects must express a preference for each asset that expresses in practice the usefulness that that asset represents for the subject and will be confidential preferential choices. The CREA application, which involves user registration, also guarantees the confidentiality of the data entered by the subjects and their modifiability once they have accessed their reserved area. The various steps of the CREA application are therefore shown by way of example.

Finally, the conclusion was held by Professor Ferruccio Auletta, who illustrated the civil procedural aspects related to the automation of dispute resolution through the systems illustrated during the seminar. The speech emphasizes how the Chiovendian vision of the law referring to reality must necessarily be reviewed and adapted. With the advent of law automation procedures such as the European Small Claims Procedure, we inevitably move towards the standardization of civil procedure. And the concept of “standards” is seen as an added value in the administration of digitized justice. Justice, therefore, is moving towards its hybridization because SCAN as well as CREA encourage a model that responds more to a reality devoted to digitization and originality. During the concluding speech, we analyze an aspect that invites the audience to ask themselves a question: if the processes were all resolved like ESCPs, could we still need the Palaces of Justice and the figure of the lawyer as traditionally understood? The Professor invites the audience to reflect on the possibility that a hybridization of the jurisdictional culture from the point of view of automation should also lead to the setting up of computer access points spread over several areas. The possibility of introducing new and specialized Legal Aid figures is discussed. From this point of view, the constitutional principle enshrined in Art. 25 of the Constitution, i.e. the guarantee of the natural judge pre-constituted by law on the basis of the criterion of matter, value and territory, should, with regard to the last criterion, probably be revised with regard to a fragmentation no longer geographical in the territorial sense, but as access points located throughout the territory. 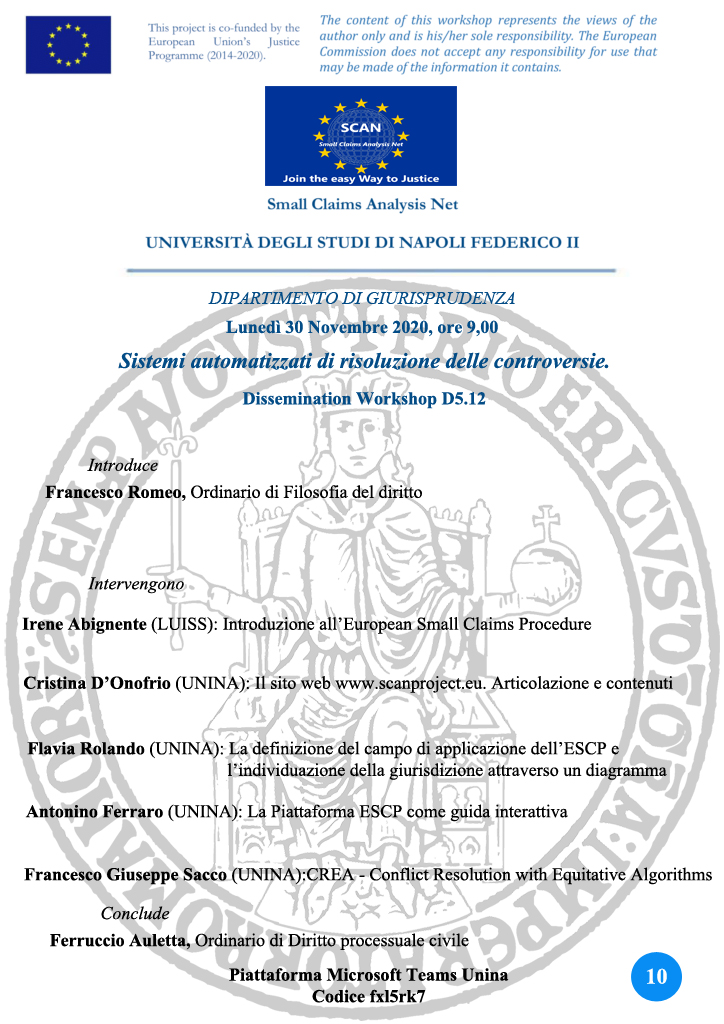